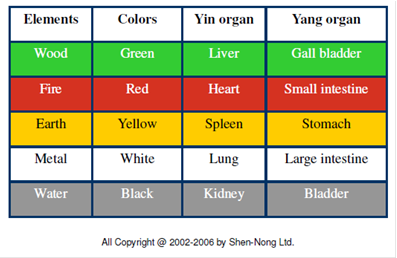 The five elements and their correspondents

What is the Five Elements Theory?

The Five Elements Theory evolved from the study of various processes, functions, and phenomena of nature. The theory asserts substances can be divided into one of five basic elements: wood, fire, water, metal and earth which contain their own specific characteristics and properties. Today we refer to this medical system as Traditional Chinese Medicine (TCM).

How is the Five Elements Theory related to our health?

The physiological activities of human organs are also part of natural phenomena so they can be classified according to the different characteristics of the five elements as well:

Balance between generation and restriction is important for normal transformation of the five elements. Each element is under the influence of the other four in some way. For example, wood generates fire and water generates wood. On the other hand, wood inhibits earth, but itself is inhibited by metal. In this way, all five elements establish an intricate homeostasis in nature. This wisdom has also been applied to TCM by incorporating the theory of the five elements into health maintenance strategies, which have been successful for thousands of years.

In western medicine, the body’s organs are explained in terms of their anatomical structure and physiological functions. However, in Traditional Chinese Medicine (TCM), the approach is quite different. Organs are considered functional units of the body. Therefore, what is typically thought of as an organ (i.e. heart, liver, stomach etc.) has a much broader meaning and application in TCM. An organ’s anatomical structure is not as important as its yin yang properties or relationships with other organs. Chinese medicine recognizes five yin organs and six yang organs, also known as “zang” and “fu” organs respectively. In TCM, the physiological functions of the body are based on harmonious relationships between yin and yang organs. That means you may have health problems if your yin yang organs are not in a balanced condition.

How should I pick a product suitable for me?

Thank you for your patronage and we look forward to your next purchase!