Coriolus versicolor (also known as Trametes versicolor) is named yun zhi in Chinese; the first word “yun” means cloud and the second word “zhi” refers to a special kind of health supplement mushroom. The name “cloud mushroom” is given because of the interesting wavy ring patterns found on the layers of the mushroom caps. If you look at a cluster of Coriolus versicolor, you would see how its small rings resemble stacks of colored clouds.

Zhi, is a family of health supplement mushrooms in the Chinese culture. The renowned medical scholar and herbalist, Li Shi Zhen, recorded zhi in the Compendium of Materia Medica during the Ming Dynasty (16th century China.) They have long been recognized for their non-toxic and invigorating effects to preserve vitality or prolong life. 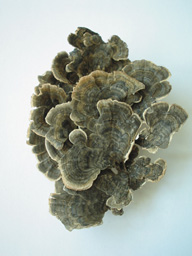 Zhi mushrooms are categorized in traditional Chinese medicine (TCM) by colors, which have green, red, yellow, white, black and purple six colors. The five colors, green, red, yellow, white and black are associated with homeostasis and proper functioning of the five organ systems, the liver, heart, spleen, lung and kidney respectively. While the purple mushrooms is related to the health of essence and qi levels. Although zhi mushrooms of different colors have different specialized health benefits, they all are identified as having general health promoting benefits. The gentle and invigorating properties of the zhi mushrooms are very suitable to consume regularly for long-term health. If taken for an extended period of time, these benefits were described in the Compendium of Materia Medica as “keeping our body ‘light’ (being fit and not too unhealthily heavy or fat), preventing (abnormal and unhealthy) aging, and making one live long (healthily and naturally according to life’s aging cycle as life is gifted).” Ancient TCM practitioners understood centuries ago that zhi are special health supplement mushrooms, which are good for maintaining general health and preserving a normal life-aging process if taken appropriately.

The Chinese character for zhi mushrooms can be found in numerous legends related to the discovery of zhi. Zhi were once regarded by the Chinese as auspicious herbs. Some ancient books said that zhi grew when the king of the country was kind. Some regarded zhi as celestial herbs, because they were rarely found. Some even said that after taking these mushroom herbs, one could become a celestial being. Although these are only folk legends, they give us a rough idea how the ancient China viewed zhi mushrooms. The ancient Chinese believed zhi were special and grown from the “essence of the hills and valleys, clouds and rains, four seasons, five elements, yin and yang and day and night.” They were something mysterious, precious and not easily found.

Today modern researchers from all fields such as fungi biology, botany, herbology, pharmacology, biology, physiology, biochemistry, Western medcine, TCM medicine, immunology and even oncology are studying these ancient mysterious zhi mushrooms to better understand the health benefits locked inside them. This body of research shows some promising and interesting results in different in-vitro and in-vivo study settings. Well-known examples of well-researched zhi mushrooms include Coriolus versicolor and Ganoderma.

Yun zhi first caught the attention of researchers in China in 1984 when reputed fungi expert, Professor Yang Qingyao, first successfully identified the optimal COV-1® strain of Coriolus versicolor among 80 identified, isolated and collected strains. This strain is specially cultivated using a deep layer cultivation technology with submerged fermentation to make it available for mass production. Prof. Yang also made a technological breakthrough in the structural elucidation of polysaccharopeptide (PSP), which is an active ingredient of this mushroom. Using a special extraction method by fractional precipitation with alcohol, specific types of PSP molecules are isolated from this mushroom’s mycelia which are responsible for this mushroom’s health efficacy. This complex process of isolating effective PSP molecules is one reason why not all products containing PSP may have similar health benefits as our mushroom products.

In light of the longevity health benefits of zhi mushrooms recorded in the ancient literature, researchers began to ask if these significant effects might be related to our immune function in terms of modern physiology. Today there is consensus among researchers that immun-enhancing effects play a major role in the overall health benefits of zhi mushrooms.

There are various types of the white blood cells taking part in the immune system.

White blood cells are the main cells that “execute” the immune functions for the body. There are various types of white blood cells taking part in different parts of the immune system. They include the acquired immune system, which can form antibodies and activated lymphocytes that attack and destroy specific foreign organisms or toxins. Cells involved in the acquired immune system include cytotoxic T cells, helper T cells and suppressor T cells. The T lymphocyte system can kill foreign bodies directly once induced by the antigens of foreign bodies and/ or by the subsequent activation of plasma and “memory” cells of the B lymphocyte system, which produce antibodies upon antigen stimulation and activation. There is another innate immune system that does not need antigen stimulation and activation. Cells involved in this non-specific immunity include natural killer cells, macrophages, and neutrophils. These cells act as the body’s first line of defense and can kill the foreign bodies before the activation of the T and B lymphocytes. In addition to immune cells, some small molecular proteins also take part in the immune system and help regulate and mediate the activities of the immune cells. These proteins are called cytokines. Interleukins (IL), interferon (IF), tumour necrosis factor (TNF) are examples of cytokines.

In TCM, there is no specific term for “immunity,” but the concept of immune function has incorporated in its theory based on its holistic concept. The body is viewed as an organic whole. Each body part is connected through the meridian system forming a complex set of interrelationships to keep the body regulated and balanced. Every body part has its own particular role in protecting the body against pathogens. They combine to build up a defense and surveillance system that TCM physicians call healthy qi (zheng qi), a TCM term similar to immunity in a modern sense. In other words, TCM considers immunity, the body’s defense, self-regulating and repair abilities, as a flow of qi (energy) inside the body, and is closely associated with the activities of the organs.

In TCM, healthy energy (zheng qi) refers to the body’s natural resistance against diseases and its repair ability, which is closely associated with the physiological activities of the organs.

A famous quote from the Yellow Emperor’s Classic of Internal Medicine, says “If healthy qi is present, pathogens cannot interfere with the body easily.” Although this sentence looks simple, it reflects an important concept of TCM. There are many factors that cause the body to become unbalanced, but they are all related to the conflict between healthy qi and pathogens. The conflict between the two forces is what allows the disease to either progress or allows the body recovers to a healthy state. We are constantly exposed to environments or substances that can compromise their health, such as bacteria, parasites, pesticides or other pollutants. When the body functions well and has good immunity, it is easy to keep disease and injury minimal with faster healing and prolong life as well. Preservation of healthy qi and ensuring its free flow are the ultimate goals for good health.

As already stated, improper immune function can lead to a host of problems such as infection, slower healing, organ dysfunction, tissue degeneration, cancers and even early aging. A key for well-being is to integrate all the components of the immune system and keep them in balance, neither underactive nor overactive. TCM’s holistic approach often uses qi tonics for this purpose, selects herbs that promote qi production and enhance proper organ functioning. There are many types of qi tonics including medicinal mushrooms or fungi that are traditionally highly rated for this purpose. Certain mushrooms such as Corioulus versicolor in particular have been found to contain compounds with powerful immune modulation effects. Their protein-bound polysaccharides have positive activities on anti-cancer, immune cell response, as well as metabolism and hormonal balance. Medicinal mushrooms are popular for a wide range of health problems, especially for enhancing and rebuilding the body after major or long-term illnesses. 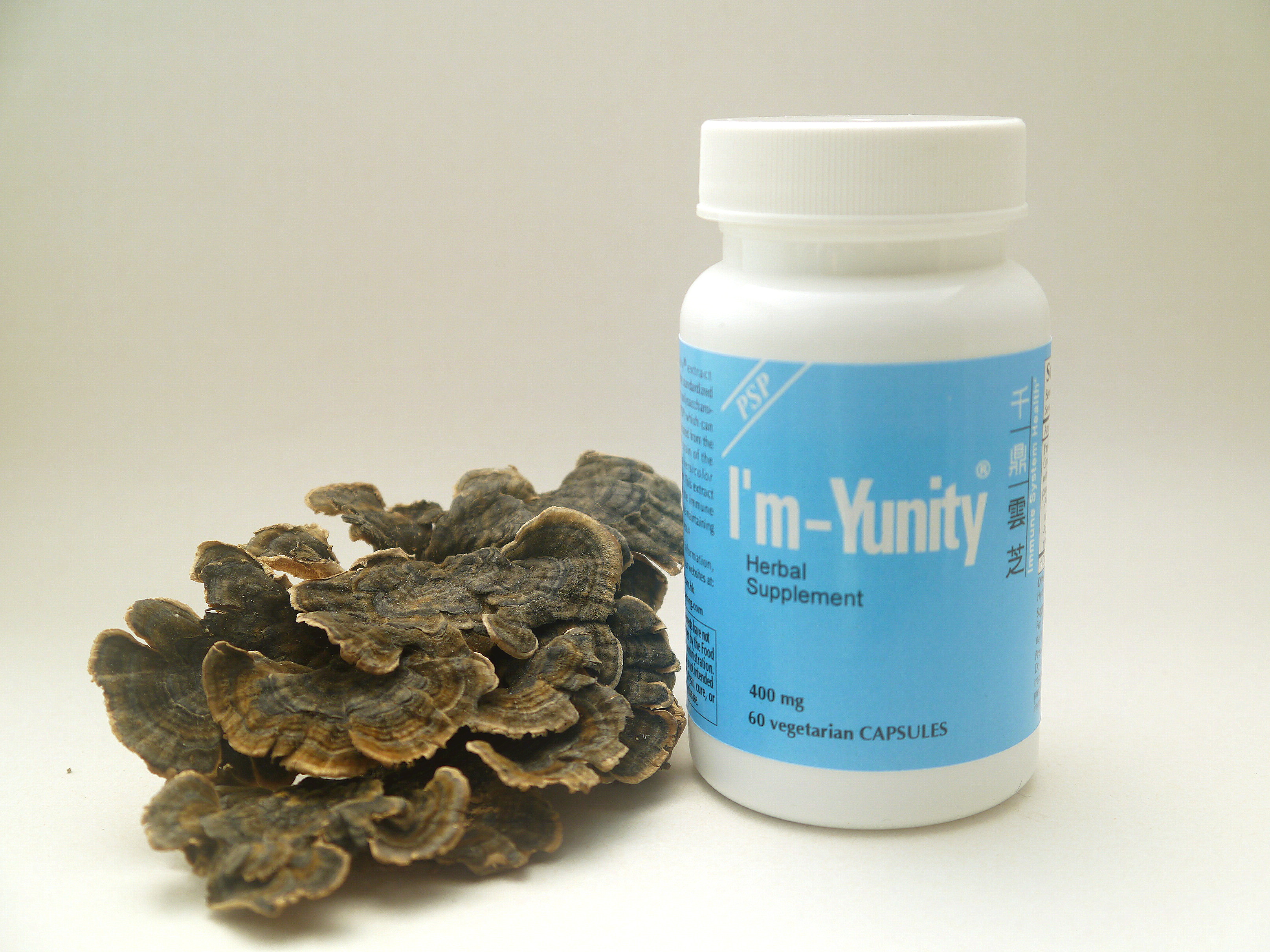 Our Coriolus versicolor extract is produced in the factory in GMP (good manufacturing practices) standards, which additionally ensures its standards of quality and purity to make sure you are getting the most potent PSP active ingredient. 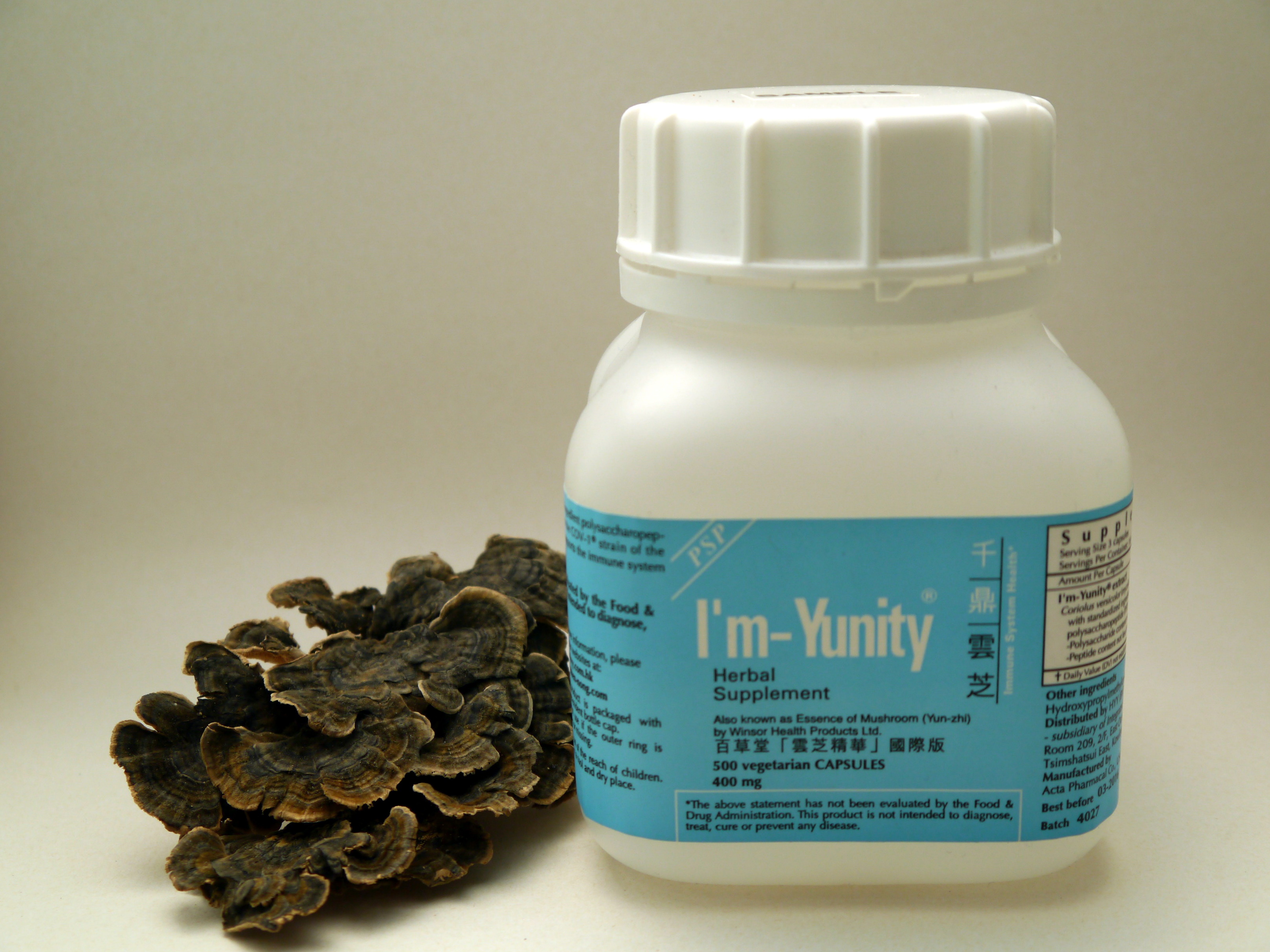 I’m-Yunity® is a well-researched mushroom health supplement made from the mycelium extract of yunzhi mushroom (Coriolus versicolor). Over the last 20 years, our company group has supported numerous studies including clinical trials on identifying the active ingredient groups of polysaccharopeptide (PSP) and elucidating its immune health benefits in the body.

Phase I4 (21 cases, 1 hospital), Phase II3 (485 cases, 8 hospitals) and Phase III2 (650 cases, 14 hospitals) randomized controlled clinical trials showed that our PSP supports normal immune function and benefits general well-being. 2,3,4,5 These results were reflected in the increase in the activity of natural killer cells 3, increase in the production of interleukin-2 2,3 and increase in the ratio of helper T cells (CD4+) to cytotoxic T cells (CD8+)2,3 in comparison with the control group. The above are all immune cells and proteins responsible for guarding against and killing any foreign bodies and abnormal cells in the body. Their increase suggests our PSP possesses immune supporting benefits and potentially can enhance the immune surveillance of the body. Another clinical study carried out by clinical oncologists successfully showed PSP was able to maintain white blood cell counts in comparison with a control group,9 and, a recently published phase II (34 cases) 1 double-blind, placebo-controlled and randomized clinical trial reportedPSP had significant improvement in white blood cells and neutrophil counts, serum Immunoglobin G and Immunoglobin M (two types of antibodies in the serum of blood)(p<0.05).1

Other experimental studies suggest our PSP can induce the increase of cytokines (immune proteins) such as an increase in α and g-interferon production6 and an increase of helper T cells (CD4+) under certain experimental conditions.7 Moreover, PSP was shown to activate macrophages, which secrete tumour necrosis factors and other reactive intermediates to mediate immunomodulatory effects. 8 An animal study also suggested PSP may counteract the depressive effect of certain drugs on white blood cell counts10 and interleukin-2 production.10

Do not take this product if you have had an organ transplant. Consult a healthcare provider before taking I’m-Yunity® if you are on immunosuppressant medication.